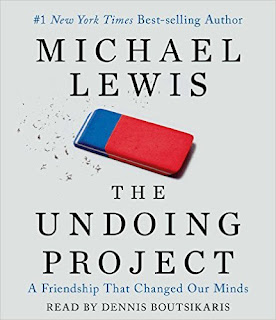 From Michael Lewis, the Story of Two Friends Who Changed How We Think About the Way We Think

"Most decisions we make are based, in some part, on irrationality-- sometimes referred to as a gut feeling or intuition. Author Michael Lewis simplifies the brain-boggling lifework of Amos Tversky and Danny Kahneman, who developed the new discipline of behavioral economics to explain the seeming irrationality of financial decision making. Narrator Dennis Boutsikaris' faultless and cogent reading keeps the project moving...."
Audiofile Jan 2017