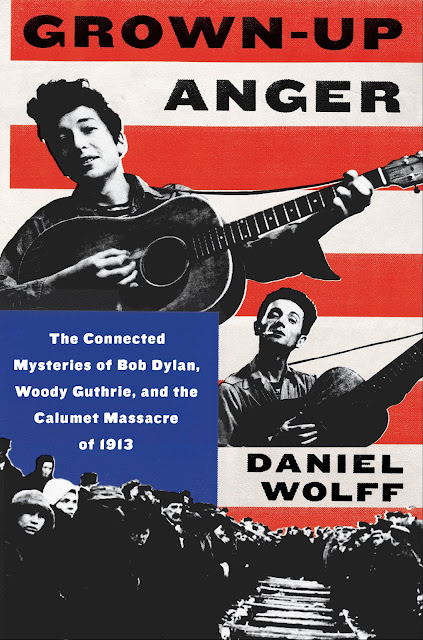 From the author DANIEL WOLFF.

Woody Guthrie, Bob Dylan and Labor Relations all connected by one great song.

“No matter how much you think you know about Bob Dylan and Woody Guthrie, you’re wrong… This is the best sense anyone has ever made about the connection between them, and the best reappraisal either has had in a couple of decades.” (Dave Marsh)“In Grown-Up Anger, Daniel Wolff assembles an American triad to raise the ghosts of greed and misery. Through memory, music, and a clear insight into the emotional process of protest, Wolff reminds us of how it did, and how it does, ultimately feel.” (Patti Smith)
AUDIOFILE MAGAZINE REVIEW

"If excellence in audiobook narration means doing everything right while seeming to do little or nothing, Dennis Boutsikaris sets a standard here. In a feat of storytelling, Wolff has combined his own personal history growing up in Northern Michigan with the life stories of Bob Dylan and Woody Guthrie, and the intertwined histories of American folk music and radical politics. A notorious event in the labor movement, the Calumet Massacre, is a featured connection. Boutsikaris's reading is expressive but restrained, calculatingly understated in the manner of the music and performers he's describing. No accents or half-sung lyrics mar a performance that matches the text in every nuance yet never draws attention to itself. Here's a narrative that engages the heart and mind for a deeply satisfying listening experience. "

" It's hard to go wrong when Dennis Boutsikaris performs an audiobook"
"I think I would enjoy listening to him read a phone book." An Audible Listener
Dennis Boutsikaris has recorded over 120 Audiobooks for Publishers in the United States and Great Britain. He has received many rave reviews and awards for his narrations that range from Don Delillo to David Denby to Jeffrey Deaver to Stephen King, including 13 GOLDEN EARPHONE awards from AudioFile Magazine and 8 AUDIES from the Audio Publishers of America.